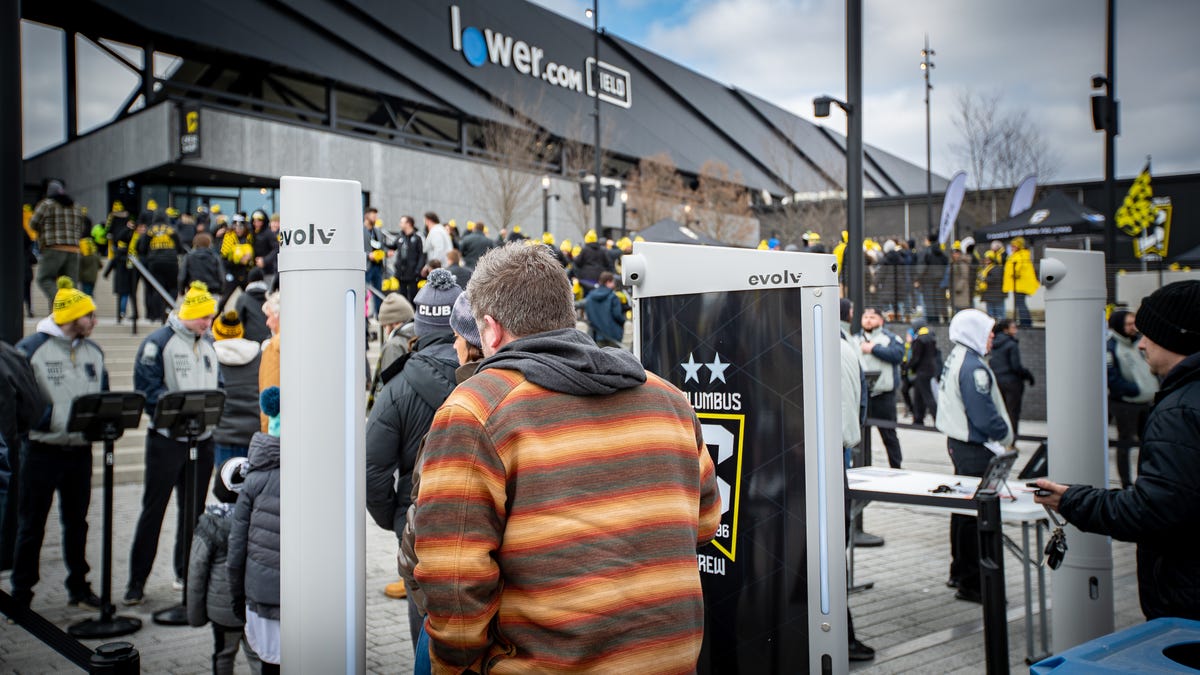 Image: EvolvHave you ever gone to a sporting event and spent what seems like an eternity just trying to get in? Security technologies can slow lines down to a grinding halt, and they're not always effective – your necklace, keys, and belt may set the metal detector off, while weapons can still get through. At…

Have you ever gone to a sporting event and spent what seems like an eternity just trying to get in? Security technologies can slow lines down to a grinding halt, and they’re not always effective – your necklace, keys, and belt may set the metal detector off, while weapons can still get through. At the FirstEnergy Stadium in Cleveland, it turns out a lot of football fans wear steel-toed boots.

“Everyone who wore these boots were setting off when they were coming in,” says Brandon Covert, vice president of information technology for the Cleveland Browns.

The team has managed to overcome this problem with artificial intelligence, after adopting security screening technology from the company Evolv.

“I would say that through machine learning, at this point, I don’t think that’s been an issue this season,” Covert says.

Also: These are the cybersecurity threats of tomorrow that you should be thinking about today

You may not have heard of Evolv, but their technology is being implemented in stadiums across the country. In fact, the company has screened more than 350 million people since its launch in 2013, second only to the US Department of Homeland Security’s Transportation Security Administration. Evolv screens nearly 750,000 every day and as many as 1.25 million on weekends.

Evolv was founded in 2013 after both co-founders had personal connections to people who were put in harm’s way due to insufficient security in mass gatherings.

Co-founder Anil Chitkara had a close friend and college roommate who was on the 101st floor of the North Tower on 9/11. Then 12 years later, he was driving home from the Boston Marathon, where he had watched his wife cross the finish line with his kids, when he found out an explosive had detonated. Co-founder Mike Ellenbogen also knew people who were directly affected by the Boston Marathon bombing.

The team developed the touchless screening system, Evolv Express, which has a similar build of a metal detector but can detect threats in a much quicker fashion. The scanners screen up to 3,600 people per hour, 10 times faster than traditional metal detectors.

The body scanners use a combination of advanced technologies including sensors, machine learning, cloud analytics, and centralized data stores, which enable the scanner to detect potential threats like knives, guns, and explosives. In a sports stadium, there is typically around a 5% alarm rate, according to Evolv.

“Instead of just looking for a binary yes/no for metal, they’re looking for certain shapes, sizes, density of things that could potentially be threatening and could potentially do mass harm,” said John Baier, vice president of sports at Evolv Technology. This, he said, “allows patrons to keep their cell phones, earbuds, keys, etc on them and walk through with the normal pace of life.”

The technology also allows for you to just walk through with no need to remove your items in your pockets or bags without accuracy being compromised.

Evolv reports that, since January 2022, its system has detected and stopped more than 30,000 guns and 27,000 knives, not including law enforcement, from entering its customers’ venues.

By eliminating the need for lengthy and hasselsome bag checks, Evolv reasons, people are able to get into the venue much quicker and staffers are able to redirect their attention where they are more needed, which will create a more positive fan experience.

Another advantage is that the more accurate readings can tell the staffer exactly where the danger is, targeting a very specific area and avoiding uncomfortable, full-body pat-downs.

“By a secondary screener, we also provide a targeted area where the person needs to search, so it’s not a ‘Please step aside so we can wand your entire body,'” says Baier. “It’s ‘Sir, Madam, what’s in your right pocket or your left ankle?'”

Also What, exactly, is cybersecurity? And why does it matter?

The Cleveland Browns adopted the technology in August at the FirstEnergy Stadium. Since then, the scanners have been used for three events – a Machine Gun Kelly concert and two pre-season games. So far, the team is pleased with the implementation’s results.

“Our stadium operations groups have really fallen in love with these, both from a speed and service perspective. Getting fans in the stadium on time is a big challenge,” Covert says. “And when you’ve got 50,000 people that get up 15 minutes before kickoff, it creates a bottleneck.So they love them, because we can clear gates extremely quick, quicker than we’ve ever been able to before.”

The Browns have placed a total of 12 Evolv Express units at their two south gates, which made it possible to replace 100 metal detectors and reduce the number of staffers in half, from 150 to approximately 75.

Because the scanners use machine learning, they can adapt to better fit each stadium’s specific public and surrounding situations. There have been 114,000 fans screened at the stadium by Evolv so far, with only a 4% alarm rate.

The Browns have also taken advantage of the analytics dashboard that comes with the Evolv system. With the dashboard, you can see your security screening system performance, visitor flow, location-specific performance and more.

“All of these machines are connected to a central dashboard. We can see in real time who’s coming in, how many people are coming in, which of the units are getting used the most, where are we sitting the threats, and we’ve used that for some operational efficiencies, like, ‘Hey, let’s move these from here over to here,'” said Covert.

In addition to the Cleveland Browns, other NFL teams have also implemented the technology, including the Atlanta Falcons, LA Rams, New England Patriots and the Pittsburgh Steelers.

Evolv’s technology is not limited to football stadiums. The system has been implemented in casinos, healthcare services, houses of worship and many schools.

“Safety is a critical service that we provide our fans on gameday, so we’re always going to look to do whatever we can, from a safety perspective,” says Covert. “A lot of ROI for us in this model isn’t going to be financial, it’s going to be experiential.”