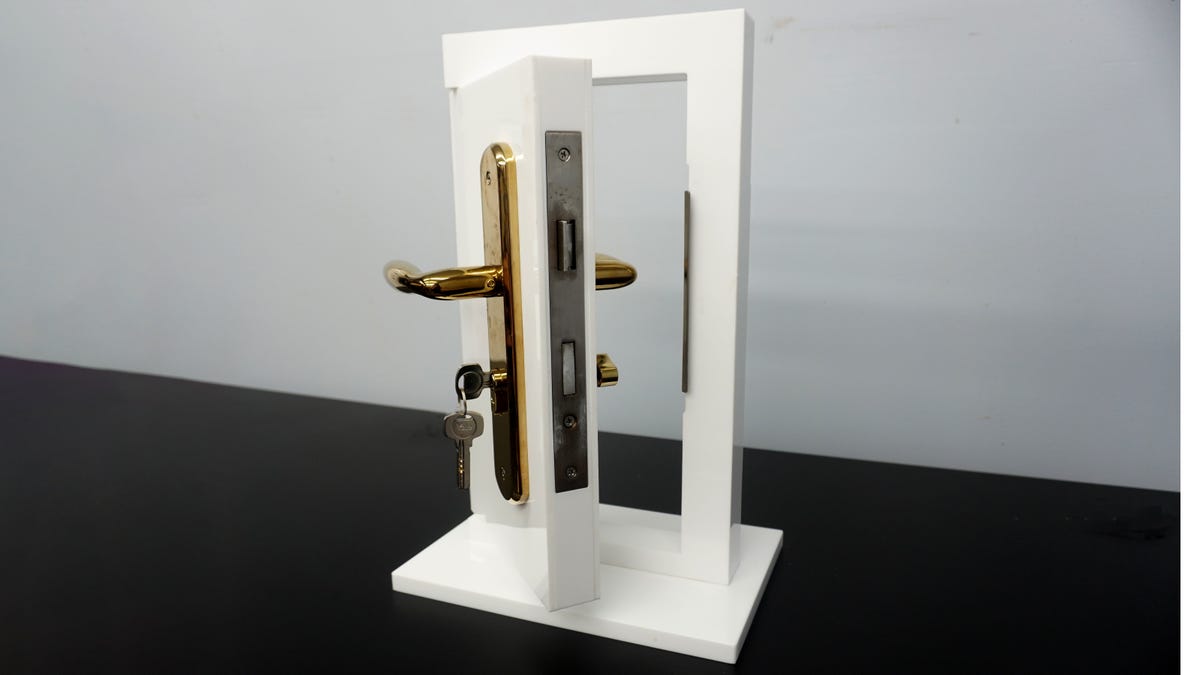 Just look at this adorable tiny door.  David Gewirtz/ZDNETA few months back, a PR representative from SwitchBot (a company that makes smart home devices), reached out to me. He wanted me to review their smart door lock.I told him no. I had just finished writing "The two smart devices I will never install in my…

A few months back, a PR representative from SwitchBot (a company that makes smart home devices), reached out to me. He wanted me to review their smart door lock.

I told him no. I had just finished writing “The two smart devices I will never install in my house,” which was slated to publish on ZDNET earlier this month. One of those devices was a garage door opener. The other was a smart door lock for an outside door. I said I just didn’t want to install anything like that in my house, so there was no reason to review the company’s product.

The creativity with which this PR representative overcame my objection was masterful. Clearly, his firm had anticipated just this sort of objection and had a plan to overcome it.

Also: The best smart locks for a secure home

So even though I had told this individual that I would not review the door lock, wouldn’t you know it? A sample SwitchBot door lockand internet hub showed up on my porch, delivered by the friendly neighborhood UPS delivery person.

I ignored it, because I’d already told SwitchBot that I didn’t like smart door locks and had no intention of reviewing it.

Then, just a few days later, a heavier box from SwitchBot showed up on my porch. It was a door, a fully-functional and operational door, but only about two feet tall. It was a door fit for a tiny hobbit, except for its full-sized brass handle and intriguing locking mechanism.

SwitchBot had clearly figured out that some reviewers didn’t want to mount their door lock on their doors.

So someone on the PR team came up with the idea of supplying a door. The company either designed and had one built, or found a supplier of tiny demo doors.

In my case, it worked. I have to give kudos to SwitchBot’s PR team for one of the most creative and constructive objection overcoming strategies I’ve seen in years. I’m a big believer in rewarding innovative and out-of-the-box thinking. And so, below is my look at the SwitchBot door lock.

The SwitchBot door lock takes an interesting approach to smart locks. Most smart door locks replace your existing lock and often involve replacing some door hardware to make them work. As a result, almost all of them look like smart locks on the outside of the house.

Not so for the SwitchBot lock. It retrofits your existing door hardware by mounting on top of it, inside. As a result, there is no change to the outside look of your door. This could be an ideal smart lock solution for renters or people living in HOA-restricted dwellings who aren’t allowed to make outside changes to doors. That said, as the picture below shows, you will have a clunky-looking piece of hardware grafted to your inside door lock mechanism. It’s not terribly ugly, but it’s also not terribly attractive.

Here’s the SwitchBot door lock mounted on a door.

The mechanical engineering is innovative, though. As the picture below shows, there’s a spinning hub. This fits over the deadbolt knob inside. The product comes with three plastic hubs of varying degrees of thickness, to account for different styles of deadbolt knobs.

The knob mechanism is seated on three floating cams. This allows the unlocking hub to spin the deadbolt even if the two parts of the system aren’t precisely aligned.

The entire mechanism attaches with strong industrial tape to the inside of the door. In order to space the device the correct distance from the door plate, a series of holes are drilled into a spacing mechanism that extends, if needed.

For the provided door, I had to move the tiny screws to the third holes from the front, which made the mechanism about half an inch deeper.

Here’s a close-up of how the three elements work. The hub spins the deadbolt lock, but uses the cams to account for any offset. And the spacing mechanism pushes the whole device out from the door plate to fit the door hardware, as well as providing tape to secure the device to the door.

As is the case with most smart locks, you can control this via an app. The lock itself can be controlled via Bluetooth, but if you buy the separately sold $39 mini hub, you can control and check the status of the lock over the internet as well.

As the above graphic shows, there are a number of ways you can trigger the lock and check its status, including the usual voice control suspects.

Because I didn’t mount this on my front door, I can’t tell you how this device works in day-to-day life. As such, this isn’t as much a full-on review as it is a report of my impressions tinkering with it.

I like the engineering. The company clearly thought out how to retrofit existing doors. Of course, it worked with the sample door provided, but the inclusion of different hub spinners implies that the product is built to accommodate most locks and deadbolt knobs.

Two things concern me. The deadbolt spinner is made of plastic, and could wear or break over time. And the entire unit is attached to the door’s existing locking mechanism with tape. If that tape loses its grip or weakens, it could tilt the mechanism, causing it to bind… or the whole thing could simply fall off and crash to the ground. I’m concerned about how many door slams it can withstand before the tape gives way.

Would I recommend it? Well, keep in mind that I’ve already decided that internet-enabled door locks are not something I would ever install in my home. That said, if you’re less concerned about that than I am, this is an interesting solution — especially for those who can’t or don’t want to change the outside appearance of their doors. It’s certainly worth testing out. But whether it will hold up over time, jam, or drop to the floor is a reasonable concern, though probably not a common occurrence given that the product has 4.5 stars on Amazon.

Finally, I have nothing but admiration for the PR team and their method of overcoming objections. I had firmly decided I wouldn’t be writing about this product, but here I am. I was amused and intrigued enough by the little tiny door that I let down my guard and spent some time with the product.

I’m glad I did, because the mechanical solution the company built was as unique as the way its PR team overcame my objections. It was nice to get to meet this company, and you can be sure I’ll be keeping an eye out for its products in the future.

Now I have a delightful little tiny door. Because that’s something I totally need for…something?