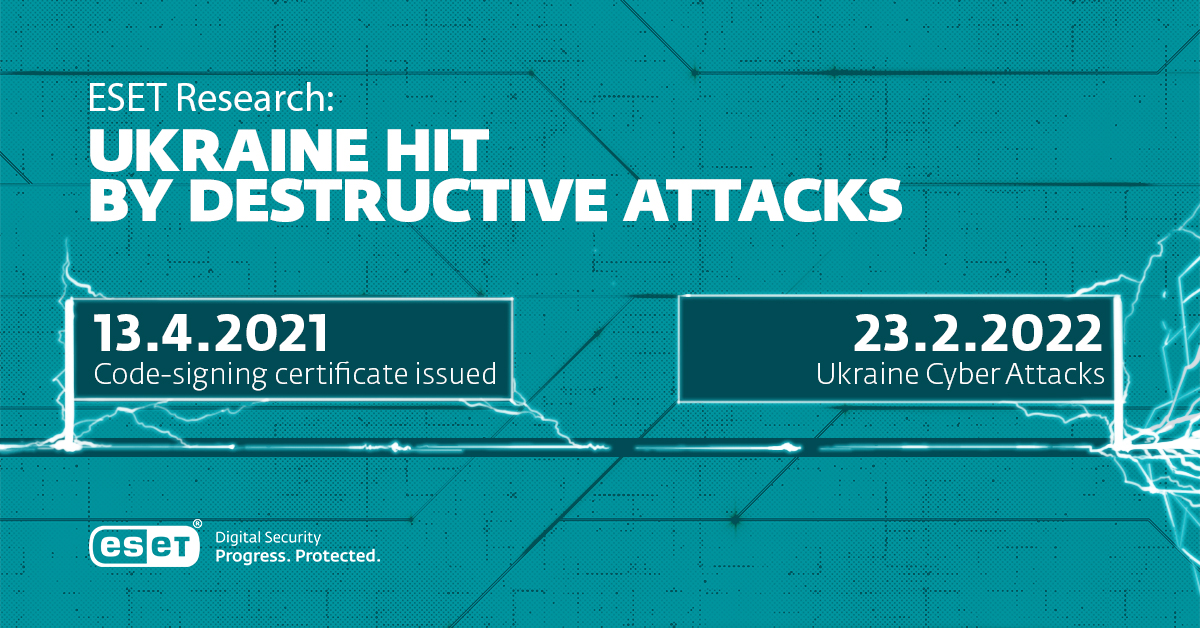 ESET researchers uncover a new wiper that attacks Ukrainian organizations and a worm component that spreads HermeticWiper in local networks Update (March 4th, 2022): We fixed an error in the analysis of IsaacWiper. It uses the Mersenne Twister PRNG and not the ISAAC PRNG as initially written. As the recent hostilities started between Russia and…

Update (March 4th, 2022): We fixed an error in the analysis of IsaacWiper. It uses the Mersenne Twister PRNG and not the ISAAC PRNG as initially written.

As stated in this ESETResearch tweet and WLS blogpost, we uncovered a destructive attack against computers in Ukraine that started around 14:52 on February 23rd, 2022 UTC. This followed distributed denial-of-service (DDoS) attacks against major Ukrainian websites and preceded the Russian military invasion by a few hours.

HermeticWiper was observed on hundreds of systems in at least five Ukrainian organizations.

On February 24th, 2022, we detected yet another new wiper in a Ukrainian governmental network. We named it IsaacWiper and we are currently assessing its links, if any, with HermeticWiper. It is important to note that it was seen in an organization that was not affected by HermeticWiper.

At this point, we have not found any tangible connection with a known threat actor. HermeticWiper, HermeticWizard, and HermeticRansom do not share any significant code similarity with other samples in the ESET malware collection. IsaacWiper is still unattributed as well.

HermeticWiper and HermeticWizard are signed by a code-signing certificate (shown in Figure 1) assigned to Hermetica Digital Ltd issued on April 13th, 2021. We requested the issuing CA (DigiCert) to revoke the certificate, which it did on February 24th, 2022.

According to a report by Reuters, it seems that this certificate was not stolen from Hermetica Digital. It is likely that instead the attackers impersonated the Cypriot company in order to get this certificate from DigiCert.

ESET researchers assess with high confidence that the affected organizations were compromised well in advance of the wiper’s deployment. This is based on several facts:

The events are summarized in the timeline in Figure 2.

The initial access vector is currently unknown but we have observed artifacts of lateral movement inside the targeted organizations. In one entity, the wiper was deployed through the default domain policy (GPO), as shown by its path on the system:

This indicates that attackers likely took control of the Active Directory server.

In other instances, it is possible that Impacket was used to deploy HermeticWiper. A Symantec blogpost states that the wiper was deployed using the following command line:

The last part is the same as the default behavior in Impacket’s wmiexec.py, found on GitHub.

Finally, a custom worm that we have named HermeticWizard was used to spread HermeticWiper across the compromised networks via SMB and WMI.

The initial access vector is also currently unknown. It is likely that attackers used tools such as Impacket to move laterally. On a few machines, we have also observed RemCom, a remote access tool, being deployed at the same time as IsaacWiper.

HermeticWiper is a Windows executable with four drivers embedded in its resources. They are legitimate drivers from the EaseUS Partition Master software signed by CHENGDU YIWO Tech Development Co., and they implement low-level disk operations. The following files were observed:

Depending on the operating system version, one of those four drivers is chosen and dropped in C:WindowsSystem32drivers<4 random letters>.sys. It is then loaded by creating a service.

HermeticWiper then proceeds by disabling the Volume Shadow Copy Service (VSS) and wipes itself from disk by overwriting its own file with random bytes. This anti-forensic measure is likely intended to prevent the analysis of the wiper in a post-incident analysis.

It is interesting to note that most of the file operations are performed at a low level using DeviceIoControl calls.

The following locations are overwritten with random bytes generated by the Windows API function CryptGenRandom:

In addition, it also recursively wipes folders and files in Windows, Program Files, Program Files(x86), PerfLogs, Boot, System Volume Information, and AppData folders, using a FSCTL_MOVE_FILE operation. This technique appears to be quite unusual and very similar to what is implemented in the Windows Wipe project on GitHub (see the wipe_extent_by_defrag function). It also wipes symbolic links and big files in My Documents and Desktop folders by overwriting them with random bytes.

Finally, the machine is restarted. However, it will fail to boot, because the MBR, the MFT, and most files were wiped. We believe it is not possible to recover the impacted machines.

Looking for other samples signed by the same code-signing certificate (Hermetica Digital Ltd), we found a new malware family that we named HermeticWizard.

It is a worm that was deployed on a system in Ukraine at 14:52:49 on February 23rd, 2022 UTC. It is a DLL file developed in C++ that exports the functions DllInstall, DllRegisterServer, and DllUnregisterServer. Its export DLL name is Wizard.dll. It contains three resources, which are encrypted PE files:

The resources are encrypted with a reverse XOR loop. Each block of four bytes is XORed with the previous block. Finally, the first block is XORed with a hardcoded value, 0x4A29B1A3.

HermeticWizard is started using the command line regsvr32.exe /s /i

It then tries to connect to those IP addresses (and only if they are local IP addresses) to see if they are still reachable. In case the -s argument was provided when HermeticWizard was started (regsvr32.exe /s /i:-s

The ports are scanned in a random order so it’s not possible to fingerprint HermeticWizard traffic that way.

When it has found a reachable machine, it drops the WMI spreader (detailed below) on disk and creates a new process with the command line rundll32

Finally, it drops HermeticWiper in

First, it creates a connection to the remote ADMIN$ share of the target using WNetAddConnection2W. The file provided in the -s argument is then copied using CopyFileW. The remote file has a random name generated with CoCreateGUID (e.g., cB9F06408D8D2.dll) and the string format c%02X%02X%02X%02X%02X%02X.

Note that the -s argument is not passed to HermeticWizard, meaning that it won’t scan the local network again from this newly compromised machine.

If the WMI technique fails, it tries to create a service using OpenRemoteServiceManager with the same command as above.

If it succeeds in executing the remote DLL in any way, it sleeps until it can delete the remote file.

The SMB spreader, named by its developers romance.dll, takes the same two arguments as the WMI spreader. Its internal name is likely a reference to the EternalRomance exploit, even if it does not use any exploit.

First it attempts to connect to the following pipes on the remote SMB share (on port 445):

These are pipes known to be used in lateral movement. The spreader has a list of hardcoded credentials that are used in attempts to authenticate via NTLMSSP to the SMB shares:

This list of credentials is surprisingly short and is unlikely to work in even the most poorly protected networks.

If the connection is successful, it attempts to drop, to the target ADMIN$ share, the file referenced by the -s argument. As for the WMI spreader, the remote filename is generated by a call to CoCreateInstance.

ESET researchers also observed HermeticRansom – ransomware written in Go – being used in Ukraine at the same time as the HermeticWiper campaign. HermeticRansom was first reported in the early hours of February 24th, 2022 UTC, in a tweet from AVAST. Our telemetry shows a much smaller deployment compared to HermeticWiper. This ransomware was deployed at the same time as HermeticWiper, potentially in order to hide the wiper’s actions. On one machine, the following timeline was observed:

On one occasion, we observed HermeticRansom being deployed through GPO, just like HermeticWiper:

A few strings were left in the binary by the attackers; they reference US President Biden and the White House:

Once files are encrypted, the message in Figure 3 is displayed to the victim.

IsaacWiper is found in either a Windows DLL or EXE with no Authenticode signature; it appeared in our telemetry on February 24th, 2022. As mentioned earlier, the oldest PE compilation timestamp we have found is October 19th, 2021, meaning that if its PE compilation timestamp was not tampered with, IsaacWiper might have been used in previous operations months earlier.

For DLL samples, the name in the PE export directory is Cleaner.dll and it has a single export [email protected]

We have observed IsaacWiper in %programdata% and C:WindowsSystem32 under the following filenames:

It has no code similarity with HermeticWiper and is way less sophisticated. Given the timeline, it is possible that both are related but we haven’t found any strong connection yet.

IsaacWiper starts by enumerating the physical drives and calls DeviceIoControl with the IOCTL IOCTL_STORAGE_GET_DEVICE_NUMBER to get their device numbers. It then wipes the first 0x10000 bytes of each disk using the Mersenne Twister pseudorandom generator. The generator is seeded using the GetTickCount value.

It then enumerates the logical drives and recursively wipes every file of each disk with random bytes also generated by the Mersenne Twister PRNG. It is interesting to note that it recursively wipes the files in a single thread, meaning that it would take a long time to wipe a large disk.

On February 25th, 2022, attackers dropped a new version of IsaacWiper with debug logs. This may indicate that the attackers were unable to wipe some of the targeted machines and added log messages to understand what was happening. The logs are stored in C:ProgramDatalog.txt and some of the log messages are:

However, due to the current crisis in Ukraine, there is still a risk that the same threat actors will launch further campaigns against countries that back the Ukrainian government or that sanction Russian entities.

A list of IoCs can also be found in our GitHub repository.

ESET Research is now offering a private APT intelligence report and data feed. For any inquiries about this new service, or research published on WLS, contact us at [email protected].

This table was built using version 10 of the MITRE ATT&CK framework.