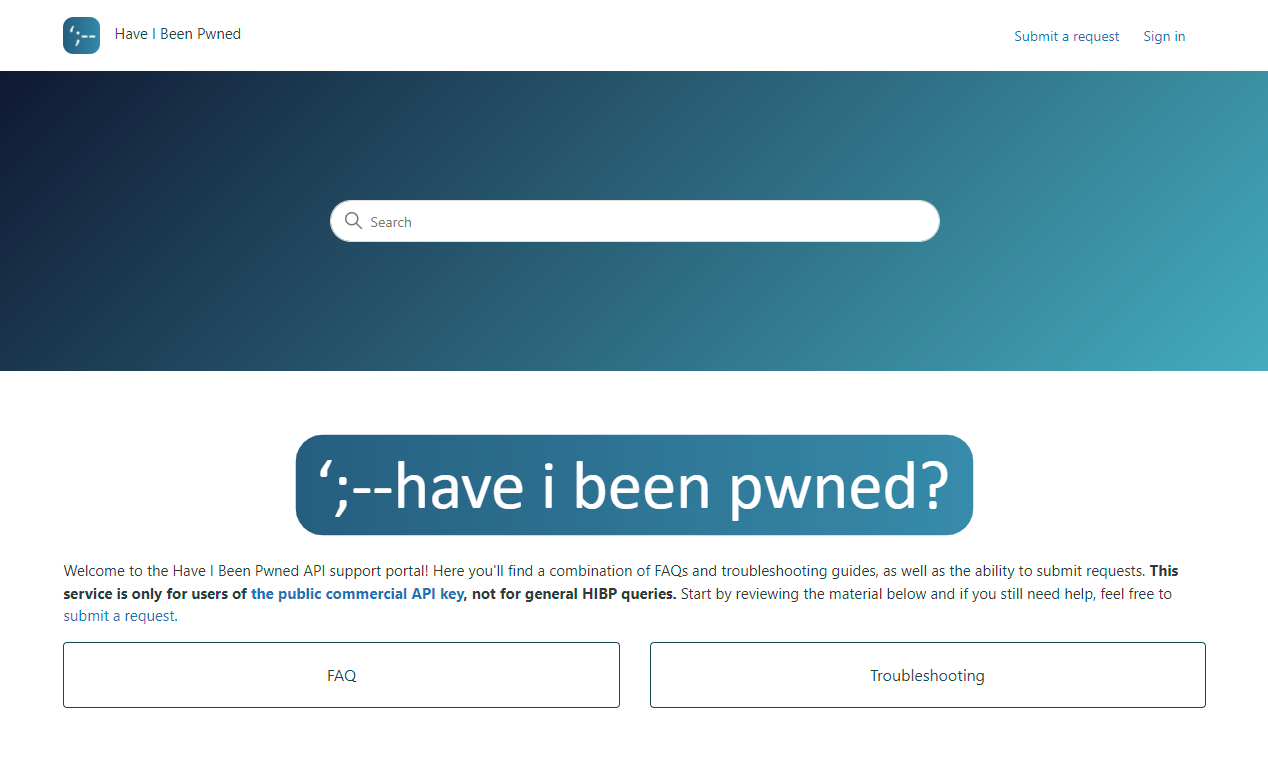 I've been investing a heap of time into Have I Been Pwned (HIBP) lately, ranging from all the usual stuff (namely trawling through masses of data breaches) to all new stuff, in particular expanding and enhancing the public API. The API is actually pretty simple: plug in an email address, get a result, and that's…

I’ve been investing a heap of time into Have I Been Pwned (HIBP) lately, ranging from all the usual stuff (namely trawling through masses of data breaches) to all new stuff, in particular expanding and enhancing the public API. The API is actually pretty simple: plug in an email address, get a result, and that’s a very clearly documented process. But where things get more nuanced is when people pay money for it because suddenly, there are different expectations. For example, how do you cancel a subscription once it’s started? You could read the instructions when signing up for a key, but who remembers what they read months ago? There’s also a greater expectation of support for everything from how to construct an API request to what to do when you keep getting 429 responses because you’re (allegedly) making too many requests. And yes, some of these queries are, um, “basic”, but they’re still things people want support with.

In the beginning, all emails from HIBP came from [email protected] because I simply wasn’t geared up to provide support. In my naivety, I assumed people would see “noreply” and not reply. Instead, they’d send email to that address, get frustrated when there was no reply (from the “noreply” address…) and seek out my personal contact info. Or they’d lodge a dispute with Stripe because they’d emailed [email protected] asking for their subscription to be cancelled and it wasn’t. So, back in September I started looking for a better solution:

I’m thinking of setting up a more formal support process for @haveibeenpwned, especially for folks buying API keys and having queries around billing or implementation. Any suggestions on a service? Something that can triage requests, perhaps also have FAQs. Thoughts?

This was a non-trivial exercise. We’ve all used support services before, so we have an idea of what to expect from an end user perspective, but it’s a different story once you dive into all the management bits behind them. Frankly, I find this sort of thing mind-numbing but fortunately it’s a task my amazing wife Charlotte picked up with gusto. She has become increasingly involved in all things troyhunt.com and HIBP lately as she brings order, calm and frankly, much needed sanity into my otherwise crazy, demanding professional life. We also figured that if we did this right, she’d be able to handle a lot of the support queries I previously did myself, so she was always going to play a big part in choosing the support platform.

Largely based on Charlotte’s work, we settled on Zendesk and about a week ago, silently pushed out support.haveibeenpwned.com:

There are FAQs that cover a bunch of frequent questions, troubleshooting that addresses common problems and, of course, the ability to submit a request if you still need help. These are all a work in progress, and we’ll add a lot more content in response to queries, just so long as they’re about the right thing. Speaking of which:

This service is only for users of the public commercial API key, not for general HIBP queries.

Uh… and why am I sleeping during the day?! pic.twitter.com/BUGTJtgl7t

Is that even a query?! I don’t know! But I do know that someone took the time to track down my personal email address this week and send it to me, and it’s not the sort of thing we’re going to be responding to on Zendesk. Nor are queries along the lines of the following:

I’ve been pwned, now what?

How do I remove my data from data breaches?

Or one of my personal favourites:

I demand you delete all my data from the data breaches or you’ll get a letter from my lawyer!

This whole data breach landscape is a foreign concept for many people, and I understand there being questions, but Charlotte and I can’t simultaneously run a free service and reply to queries like this from the masses. But the queries that come in via Zendesk are something we can manage as it’s clearly scoped, there’s lots of supporting docs and for the most part, we’re dealing with tech professionals who understand this world a bit better than your average punter in the first place.

As I announced in last week’s blog post, we’re pushing ahead with new rate limits and annual billing for the API key and getting this piece out first was always an important prerequisite. It’s all part of gearing up for bigger things ahead for HIBP

Have I Been Pwned
Source